Our vehicles work according to the internationally patented RSP suction principle. This process guarantees the highest gravity separation, the lowest filter load and as a result constantly high suction capacities. During this process, the fan creates a stream of air of up to 44,000 m³/h and a max. vacuum of 55,000 Pa. The suction hose can be moved hydraulically three-dimensionally via the carrier. The material from the stream of air is picked up in the area of the suction crown. All media, solid particles up to a size of 250 mm can be sucked up. All essential particles are deposited in the collecting chamber due to the air slowing down and swirling.

The stream of air is further cleaned and dried in the separation chamber. The position of the collecting tank guarantees optimal axle load of the vehicle. The final pieces of dust are absorbed by the micromesh filter. The cleaned air is discharged extensively upwards through a sound absorbing unit. Cleaning of the micromesh filters is done using compressed air. During the lateral emptying process, the separation chambers and the micromesh filters are also emptied along with the collecting chamber. All superstructure functions can be operated via radio remote control unit.


The strong cyclone for our city model

In cyclone separators, the material, which is permeated by air as a carrier, is set into rotational motion by its own flow speed and appropriate design of the separator. The centrifugal forces acting on the particles accelerate them radially outwards. At the outer wall, the particles in the air stream lose their kinetic energy due to friction and drop down into the collecting area. The cleaned air stream is discharged centrally upwards by means of an immersion pipe. 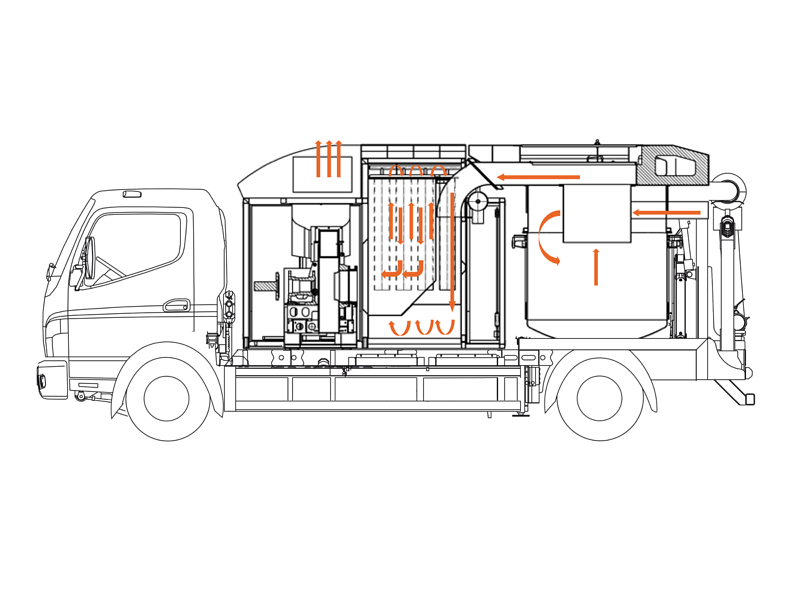